She had forgotten all about that exciting week in Paris where she felt one with herself, free-spirited and full of hope inspired by all the artists, museums and most of all, her time with the charming young French poet she fell in love with.

But today, as her youngest daughter took off for college, she visited her husband’s grave one last time, bid her farewell and as she began to drive away, she looked back one last time at this city which she was planning to leave forever to chase a dream that was breathed to life again by the letter in her hand that contained the following words – “J’attends toujours mon amour*”

*I am still waiting my love

The world was at his feet however the big walls of his mansion became his dungeon as the silence began to scream and the loneliness began to haunt him.

That’s when he met the man who promised him the sole desire of his heart, to see her again if he smoked the magical powder, but with caution because if he used it more than once he might lose his mind.

The man smoked all at once, hoping to enter the paradise of insanity where all her saw was her, as her voice invited him further and further, he lost his senses as he began to sense her presence again after years.

Hello there reader!
Inspiration for random stories comes at the most random hours and from the most random things! Trying to write fiction/story, tell me how you like it! Comment/criticism welcome!

As I sit by the window, sipping my tea, watching the blue sky slowly turn orange, alluding to the impending sunset, I am mesmerised by the pattern of flight of birds. Every day, they sit by my window sill, pigeons, sparrows, crows, the locals, much to my annoyance at times, given that they shit all over my little balcony. Despite the window being protected by a iron grill, these little flying monkeys find some way to squeeze themselves in and litter my favorite spot.

At first I tried shooing them away, but their stubborn desire and fondness for my window won in the end and I gave up. Now we just accept each other’s presence.

I hear the shrill sound of a few parrots flying somewhere nearby, towards their home at the same time everyday. One day I was fortunate enough to witness one of them perched in my window for a long time, but just as I went near to pet it, it flew away, mocking me.

I see the crows sit solmenly on the roof of buildings, discussing crucial issues in the bird world probably, or reviewing their weekly targets (I would like to think its not just us humans who are bound by the shackles of targets and deadlines)

But today there’s something different about the birds. They aren’t flying home. I see a few crows  flying back and forth in circles near my window. Odd, I think to myself.

Just as I get up to go away from the window, one of them comes at full speed, like a rocket if you must, and rams into my window grill, stuck, struggling to get in, but with almost a fire in its beady little eye. Like a man on a  mission, I try to shoo it away but it just keeps cawing and struggling to come near me. Before I can react, many more crows join this little game of “lets enter this house at any cost”. I am flabbergasted.

Until realisation dawns on me. It’s my coven. That’s right I am a witch. An ex witch if you must. I left my coven and all the practices some time back when I shifted to the city to live a normal life. They had warned me that no one walks away from them. This is just the start, the crows are just a little preshow act, sent by my coven to bother me. A warning for me to come to my senses and go back to them. But I refuse to comply.

I am dragged back to the present by the cawing. Irritated, I murmur a little spell and throw a little lightning on the nasty birds and shut my window. That should keep them away, I smile.

Oh no, hopefully one of the neighbours or pedestrians didn’t see this. I can’t move away again. Sigh. Damn, I am tired of being a witch.

There might be days when it feels like a hole has been punched into your chest and no matter what you try to fill it with, it just keeps getting bigger.
You want to curl up into a ball and just hide somewhere, or sleep and forget all about it. But for how long?
Some people will tell you to “Just be Happy” or “don’t think about it”. It’s like cutting open a vein and then asking someone to not feel any pain, or to not bleed.
This constant mental calculation, trying to find the cause, solution, different scenarios leaves you mentally exhausted.

Deep down, you want so much to be just happy. Some things seem to work, some things make it feel alright but only for sometime.

And then you keep wondering, hoping, searching for the next thing that will help, until it doesn’t anymore.

As much as you long and hope to find whatever it is that will make you whole again, what If you know for a fact that the only destination to this search lies within yourself.
And you don’t know how to get there.

He was like the wind.
Powerful, unstoppable and ferocious.
He could lift my spirits like a blow of wind gives a few moments of flight to a helpless fallen leaf, a few moments of love to my barren heart.
He could also be oblivious like the wind, taking these leaves to unknown places, introducing my heart to  emotions I didnt know exist, and then deserting it and moving on.
Can the leaves blame the wind though?

Janet died a year ago, or so people think. But I know better.
She misses being in society, still the social butterfly. I urge her to stay hidden, but she manages to claw her way out to meet people, friends, family.
Luckily people think it’s me, so no one suspects anything.
Thank goodness we are twins. I can’t have people send her away,  again.
She completes me. 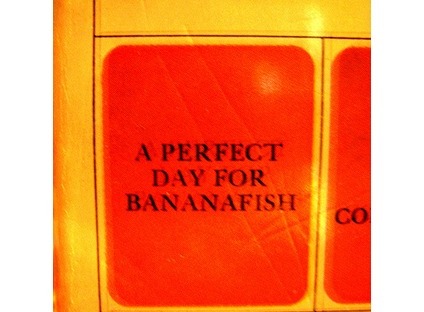 I have been reading “Nine stories by J.D Salinger” these days and I am so awestruck by the use allusions to state a deep underlying point.

A perfect day for bananafish is one of the most popular stories by him. Often people end up spending more time thinking about the story and coming up with various interpretations of it, than time spent on actually reading it.

This story revolves around four important characters. A married woman, Mrs. Muriel Glass, who is devoted to her husband, but only in some ways, her husband Seymour Glass, who has returned from the war but is facing difficulty living a normal life. (He could be suffering from what is referred to as PTSD in today’s world)

Muriel doesn’t leave her husband despite his eccentricities, but at the same time doesn’t take any real effort to help him either. She is a woman caught in a web of materialism. Trapped by society and it’s facade, only interested in all things superficial. This alluded to by her perfect attire, her expensive bags, interest in social gatherings – even at the expense of letting her husband feel alone. This is perhaps the biggest hurdle in their marriage, second only to her mother. An overbearing, over protective woman who is as equally a socialite as Muriel.

Seymour is described to be an eccentric man, or someone who might lose his mind soon. However, his actions initially appear to be balanced and normal. He prefers spending time alone, playing the piano or interacting with children, rather than blending in with other adults.

The fourth important character is Sybil, a little girl who meets Seymour on the beach. She is innocent and free from the cruel world of adults. Her judgment is free of bias. She is the only one who can perhaps “see”  the world as Seymour does, even the imaginary Bananafish he describes. She represents a guilt free innocence, one that Seymour wants, but can’t go back to.

The two main plots in the story are 1. Bananafish 2. Absence of Communication.

The bananafish , described as fishes who gorge on bananas then become and fat and are unable to escape and thus eventually die. They represent the human condition where people “stuff” themselves up on the metaphorical bananas of anger, lust, greed, hate and other material things and in the end are unable to ‘get out of this’ trap. Like Seymour is now filled with memories of the war, which haunt him and stop him from going back into society with adults and live a normal life. Thus, he must die too like the bananafish.

In a way, the bananafish describe the human predicament of being stuck in a rut negativity, or being full of negative emotions such that it is impossible to get out of this trap.

Secondly, there is too much noise between the characters. Muriel and her mother, talk at each other instead of to each other. Each not paying heed to the other’s concerns.

Similarly, Seymour cannot talk to Muriel about how he feels like a misfit, like he doesn’t belong. He is scared to unveil his true emotions and feelings to her, but he can easily communicate with Sybil, a kid. He can expose himself to her without the fear of being judged. He lives in a constant fear of being judged as is shown in the elevator scene.

In the end however, fed up of trying to get out of a situation and trying to blend in when no one gets him, he ends his life.

Not very different from how most of us feel at some point, like no one understands how you feel. No matter how hard you try, no one seems to listen.

Have you read the story? What do you think about it?